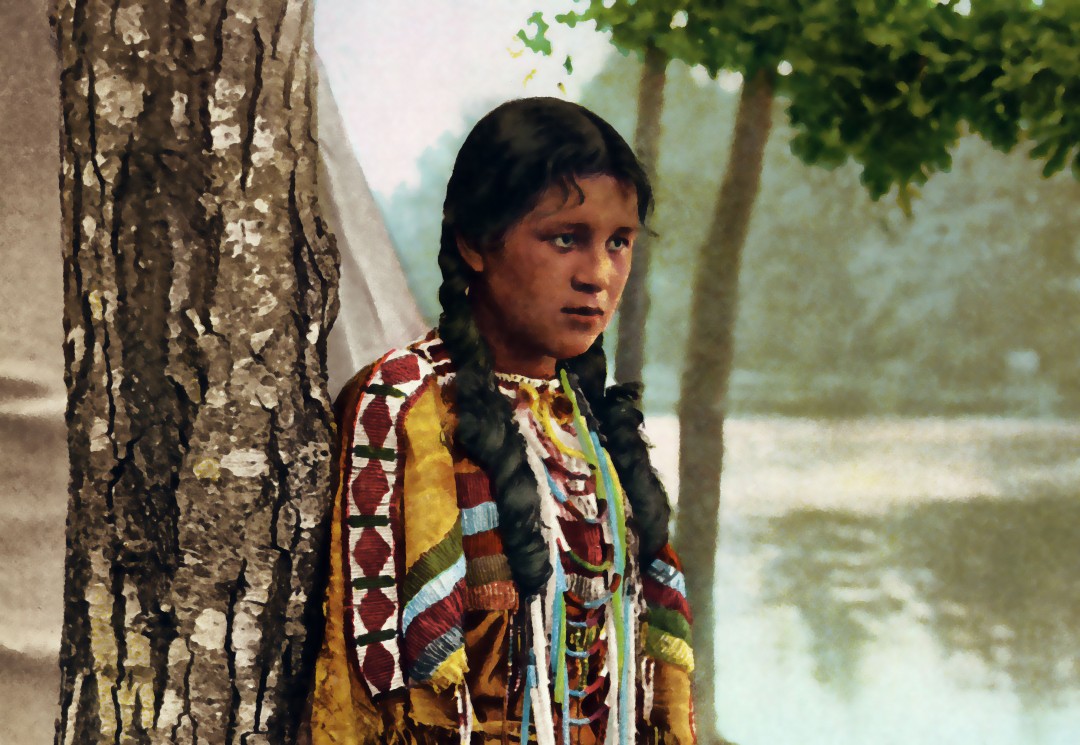 Welcome back! In this weekly series, we present, for your reading enjoyment, some of our favorite short stories, in easily digestible serialized episodes. Each week will contain links to the previous episodes of the story (in case you miss one). Please let us know what you think — and if you have written a story you would like to see serialized, please feel free to let us know that as well.

. . . Racking pain ran through Shoshawna’s entire body, but she held tight to the blade in her hand. She jerked her arm, but without the bears throat to provide resistance, her fist came up. The bear went for it like fish to a piece of colored string. Pain shot though her hand and a muscle spasm drove the knife into the soft pallet at the back of the bears throat.

The creature’s own momentum carried it forward, and Shoshawna’s left shoulder took the shock of her fist, the knife hilt, and part of the bear’s lower jaw. The knife was driven upward and blood poured out in pulsing waves, washing over her face, blinding her . . .

. . . Shoshawna circled to the left as Keasi stalked her. He held no weapon, but she wasn’t sure her own would do her much good; he had bound a cloth over her eyes.

“Close your mouth and open your ears.”

She tried to focus on the sound of his footsteps, but whenever she swung the butt of her spear, he was no longer there.

She swung at the sound of his voice, but once again, he was gone. Then something clicked. She didn’t smell the wind, she felt it. There was a sudden change in the breeze. She knew what direction it had been coming from and she swung. This time, her spear found resistance. It stopped and froze in place. She removed one hand from the spear and lifted the blindfold to peek out. Keasi held the end of her spear in one hand, and once again his eyes beamed with pride at her accomplishment . . .

. . . she had no time to wipe the bear’s blood from her eyes. The weight of the beast came crashing down on her chest, and the air exploded from her lungs . . .

. . . Shoshawna tried to follow Keasi up the small stone cliff, but she lost her hold and fell backward. When she hit the ground, the air was driven from her lungs.

. . . But, that was just a memory, wasn’t it? Her air was trying to return, but  the weight of the bear on her chest was making it hard to breathe. She could feel her own blood soaking her dress and she was getting dizzy.

“Are you okay?” Keasi asked once again.

He no longer felt like a memory. He sounded very real. She knew why. “I’m dying,” she whispered, but she wasn’t sure he could hear her.

She felt the bear roll off her and winced as a hand was pressed to her side. She tried to blink away the blood in her eyes but everything was blurry.

“I’ve been proud of you since we were small children.”

She laughed as she tried to picture Keasi as a small child. He was  much older than her.

“You’ve always been brave,” he said as his strong arms lifted her off the ground. The pain in her side sent a shock through her and she passed out . . .

Shoshawna looked out from her perch near the top of the tree; a tree so impossibly tall its branches touched the sky. Her heart raced with excitement and just a little fear, but she could see the whole world from up here . . .

. . . her head still swam, and her vision was still blurred, but she could feel Keasi carrying her. “Are you taking me to heaven?” she asked.

“We have to let the tribe know where the bear is. His sacrifice won’t mean anything if his meat is wasted. There will be no honor for him.” . . .

“His sacrifice will sustain us,” Keasi said. “It brings honor to him and to us, but only if nothing is wasted.”

“I think you should have this honor,” she said, trying to hand the eyeball back to her brother . . .

. . . Shoshawna opened her eyes to find the old shaman sitting beside her, holding bandages. Awkeatu was standing over her, waving a smoldering incense ball. Their village was small, and the holy-man was also the medicine man. Awkeatu had to learn both trades.

“Keasi saved me,” she whispered.

“Keasi’s been dead for over a year,” the old man said. “And if you don’t lie still, you may yet join him.”

“It was Awkeatu that pulled you from beneath the bear.”

“I’m sorry,” Awkeatu said. “You can hate me if you want, but I didn’t interfere until the bear was dead—I swear.”

“Thank you,” she whispered before the world went dark once more . . .

. . . “The bear didn’t act like you said it would,” she admonished Keasi. “It didn’t go for my throat. I think I would have bled to death underneath the bear, if Awkeatu hadn’t saved me; he must have been following me.”

“He cares a great deal about you.”

“But as a shaman, he wont have any honor.”

Keasi laughed. “You have enough honor for three people,” he said.

. . . Shoshawna stroked the dark black fur that now lay on the floor of her hut. “Thank you,” she said. “Your sacrifice brings honor to us both.” The meat had been consumed while she recovered, but it had sustained the village.

She felt a hand on her shoulder and looked up at her friend Maisa. “It’s time,” the girl said.

Shoshawna followed her from the hut. The tables in the middle of the village had been arranged in a circle. They were laden with food for a celebration in her honor, but no one was eating. Her father stood in the center of the circle, holding a collar with a single bear tooth hanging from it.

She knelt before him and he fastened the collar around her neck. Then he tied a feather in her hair. When she stood, he handed her Keasi’s knife—her knife.

“Honor,” her father said, and a cheer went up all around her. The entire tribe began to chant “SHO-SHAW-NA! SHO-SHAW-NA!”

She looked down at the knife in her hand and felt a single tear run down her cheek.

Coming next week
The Recall, a sci-fi classic
from Anthology Askew Volume 001

Director of Production and Design RhetAskew Publishing a division of Rhetoric Askew, LLC View all posts by Dusty Grein, ACP

One thought on “Storytime with Rhetaskew (7)”