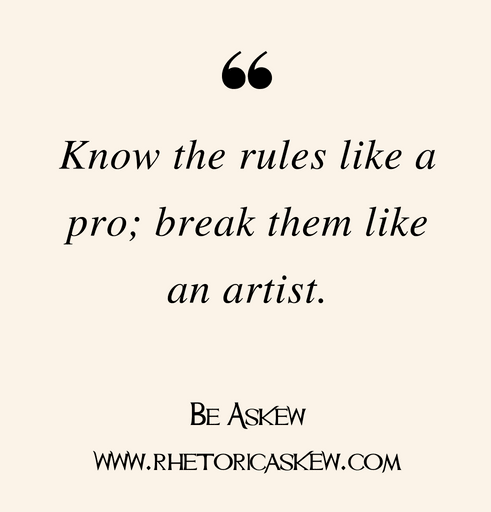 How do you go against the rules with your writing? My response…

I’m a big fan of the idea you have to understand the rules, to break them. Often, I find the writer who always breaks a particular rule, doesn’t understand. I say that because the rules have reasons to be here.

Not all passive verbs are bad, but active verbs are more exciting and easy to read. If someone is being acted upon, by definition, it is passive. If the sentence is passive, it makes sense. Overuse of passive voice, however, becomes boring to the reader. Readers want to imagine themselves in the book or story. And you can’t do that passively. Passive voice tends to be a bit wordy too.

Another rule people love to break, adverbs. Though I don’t actually (Pun intended) agree that “the road to hell is paved (wait is that passive?) with adverbs” ~Stephen King. I believe 99% of the time, a writer can eliminate and replace them with an active verb, or remove completely. (Pun intended)

Writers should also be aware, rules are different between genre, and what’s acceptable in horror, romance may frown upon.

My advice is—know of the rule, research it, understand why it’s a rule, make your decision. Then, prepare to defend it.

Rules matter. Without rules there is chaos. A little chaos is cool… A lot of chaos can boot your reader out of your story. NO one wants that.

Emma T. Gitani is a Nonna–grandmother, living in South Florida. She began her literary career as a technical writer and editor. Later, systems testing fulfilled her desire to break things. Emma has settled down to write children’s and young adult fiction. She edits for the Rhetoric Askew Quarterly, and freelances. She received her first publishing credit in Tales From Our Write Side. In her not so spare time she works as an admin for several online writing groups.

Emma T. Gitani is a Nonna-grandmother, living in South Florida. She began her literary career as a technical writer and editor. Systems testing fulfilled her desire to break things while fiction allows her to create. Emma leads creative development workshops, on www.rhetoricaskew.com and Facebook groups, as an editor for RhetAskew Publishing. View all posts by EmmaTGitani

One thought on “My2Cents ~ On Rules”